This year Lotus celebrate their 70th anniversary and to mark the occasion we decided to get to know one of their most famous models. The Lotus Esprit was launched in 1976 under the stewardship of the great Colin Chapman who enlisted renowned designer Giogetto Giugiaro to style the bodywork. The first series car was to become a typical Giugiaro “folded paper” design akin to the MKI Golf and the BMW M1.

The Esprit found instant fame after playing a starring role with Roger Moore in ‘The Spy Who Loved Me’ in 1977 as the novel and yet totally instantly cool car-submarine dubbed “Wet Nellie”. Several versions followed the initial launch model with turbo and High-Compression examples continuing the model’s lineup until 1987 when the first major redesign came along. Out went Giuagario’s sharp lines and in came Peter Stevens to pen a more rounded, aerodynamic shape for the Esprit. Stevens later went on to design the body for the fastest car in the world – the McLaren F1, and many cues such as the rounded bumper and flat bonnet can be seen in the Esprit as well as the F1. Furthermore, in true Colin Chapman form of “adding lightness” Lotus pioneered a new technique of moulding body panels to take over from their previous fibreglass bodywork called ‘Vacuum Assisted Resin Injection’ (VARI). The new car was not given a series number but was simply referred to as X180, as per its internal Lotus project code. The car we took out for a test drive is a lovely example owned by Hub team member Colin, and is in great original condition with only 39,000 Miles on the clock and a huge history file.

The cabin of the Lotus Esprit has a typical 80s feel, cosy but not cramped. The padded leather seats and centre console are sumptuous but are unmistakably period, and the deep dish of the seats means you sit very low in the car, near to its centre of gravity and therefore in the perfect position to feel the car’s movements.

At manoeuvring speed the suspension feels almost clumsy and rudimentary. At this point I was worried that my first drive in a Lotus, a company renowned for making great handling cars, would be underwhelming. However, this can be put down to the lack of power steering which saves weight and increases the feedback to the driver. Once the Esprit was up to speed and on some of the twisty B-roads it did not disappoint. Over the bumps the suspension is stiff but compliant enough to not unsettle the car and transmits detailed information about the road surface back to the driver through the off-centre steering wheel. 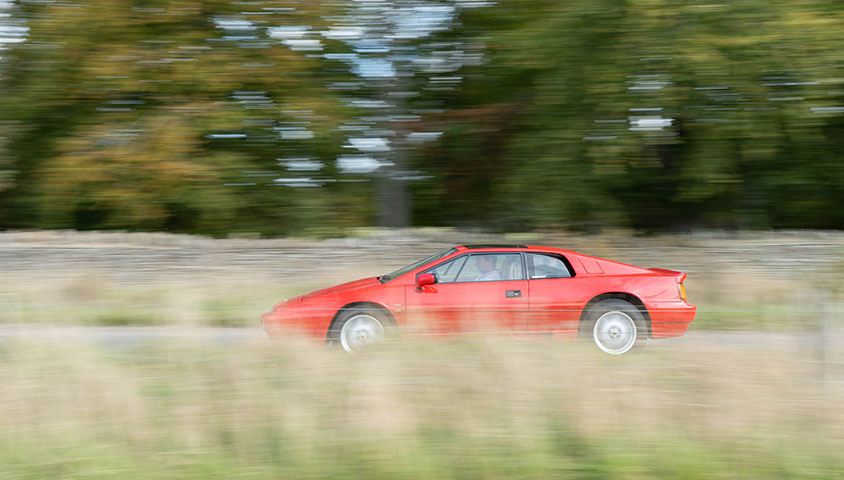 The steering has to be the car’s highlight; the wheel itself is small in diameter meaning that only small inputs are needed to direct the car through some of the tightest corners, so much so that the car seems to find its own way around a corner. Several times I found myself coming out the other side of a bend wondering how the car had made it around because it felt like I had barely turned the wheel at all.

The feeling back through the wheel is fantastic. Without any power assistance the steering has a weighty feel, meaning turn-in has to be deliberate. The best way to describe it is like a go-kart, not just in terms of responsiveness but also weight. When you pitch the car into a corner the nose tucks in neatly while the weight from the engine behind follows afterwards. There is a slight pendulum feel to this motion which (in most cars) would give an alarming sensation that the front is not connected to the rear. However, in the Esprit it just feeds the driver information about how the weight is loaded across the car and the result is that at every phase of the corner you know exactly what the car is doing. The rear end feels planted and stable and only the most exuberant driving will result in an enjoyable tail slide. The engine in this Esprit is a naturally aspirated 2.2 litre, 4-cylinder unit that pushes out around 170bhp. Hardly headline figures but the engine in this car is punchy and loves to rev out to its 7000rpm limit, pulling really smoothly and suiting the nature of the car. Being an N/A Esprit, the responsiveness of the engine matches that of the steering and while being a comparatively small displacement it must be remembered that it only has around 1400kg to push along and so it does not feel at all underpowered.

Chapman’s mantra is famous, “add lightness and simplify.” To that end the Esprit is a perfect example of this engineering philosophy. The car is uncomplicated in every regard and with its resin injected body, it is very light. It is fair to say that the X180 Esprit has been overlooked for many years, however, this is a fantastic British sportscar that deserves a lot more praise and attention. Ever wanted to get into your own Lotus Esprit? Take a look at the beautiful example currently in stock at The Classic Motor Hub