The BMW Z1 is a rare car, launched in 1989 it was new and interesting but not something the industry was particularly blown away by and honestly speaking, the Z1 didn’t stay in the spotlight for long. However, car enthusiasts noted it as something different, quirky and today the Z1 is seeing somewhat of a resurgence.

New cars have become very sterile and seem to have fewer quirks that make them stand out. Modern styling is shaped by crash regulations and wind tunnels meaning that the lines of most cars look similar and generic. Today it is only Tesla that actively design fun and novel features into their cars, such as being able to set the SatNav to display the car on Mars or the “Party” mode where the car repeatedly opens and closes its Gullwing doors so they “flap” while playing loud music and flashing its lights. These features have zero practical use but help turn the car into something less sterile, something with more personality, something more fun. This seems to be the thinking the 1980s BMW designers had for the Z1, a desire to do something a little different. 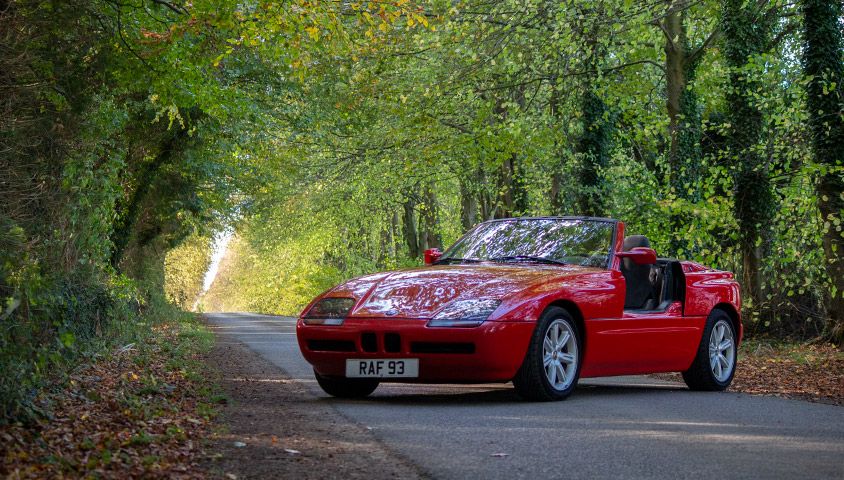 Getting in to most cars is a fairly standard procedure. Pull the handle and the door conventionally opens outwards and you step inside. On the Z1 however, BMW decided that there should be some more theatre involved in the process and so designed the doors to slide down into the sill. To get in, you step inside and grab the roll-bar mounted on the top of the windscreen and lower yourself down into the seat. However, the fun with the doors is far from over because then you can drive off with the doors still in the downward position meaning you can reach out and touch the ground while driving. While I wouldn’t recommend actually doing this, having no door next to you whilst driving obviously gives the cabin a very different feel. While you may be familiar with the buffeting caused by a convertible car, the sensation of having wind whistling around your legs as well as your head is something that really maximises the enjoyment of having a convertible car, as the speed is exaggerated by seeing the road rush past you. The “Z” in Z1 stands for “Zukunft” or “future” in English. The BMW Z1 was not designed by BMW central operations but instead was the creation of an offshoot called BMW Technik whose brief was to research futuristic materials and apply them to forward-thinking cars; the Z1 was their first creation. BMW Technik designed a lightweight zinc-plated monocoque with a bonded plastic floor pan to make the car as light as possible. The body panels were in many ways the stand out feature of the car. Made of an elastic-synthetic material (a fancy recyclable thermoplastic), they were designed to be completely removable in under an hour so that you could quickly change the colour of the car by replacing them with different colour panels. The engine and gearbox for the Z1 were taken directly from the E30 325i and so have that familiar, efficient and very BMW feel to them. The engine loves to rev and the gearbox has a short throw, making it very precise, sporty and satisfying to drive. The steering has a slower rack than modern cars but is full of feel and makes the car less twitchy, helping you turn in smoothly. At the time much was made about the ground effect technology incorporated into the underside of the car. The flat-floor design was previously only seen in Formula One and the intention of the Zukunft division was to incorporate these technologies into road cars. Whether the flat floor makes a difference is hard to say. It is unlikely that a road car will ever be going fast enough through a corner to create the necessary airflow to suck the car into the road. However, the car does turn in eagerly and corners very flat so maybe the aerodynamic design should have been given more credit than it was. The BMW Z1 is therefore deserves to be remembered as an interesting and quirky car. Frankly it is unsurprising that the special door design did not take off and revolutionise the car industry. However, that was never the intention, the intention was to do something different so that BMW’s first 2-seat convertible since the 507 Roadster stood out from the many other 2-door sports cars available in the late 80s. With this unique approach, they certainly achieved that. Fancy your own funky-doored 2-seater for some fun in the sun next year? Visit our The Classic Motor Hub Online Showroom to take a closer look at the BMW Z1