Those of you who have come to The Classic Motor Hub’s famous Coffee and Classics will be familiar with our Motor Mart magazine, in the centre of which we publish our guide to the very best Cotswold pubs. In order to show our continued support of these fantastic locations Charlie Metcalfe and myself (Will Stoneham) thought it best to arrive in style in some of the latest cars to come in stock at the Hub: a Minerva Blue 1977 Porsche 911 3.0 and a restomod Jaguar XK120 were the perfect picks for what turned out to be a pretty good day at work.

Rolling back the hangar doors always has a bit of theatre to it, but even more so when you’re about to fire up a 3.4 litre straight-six XK120 and an electric blue Porsche Carrera 3.0 for a jolly. The Jag with its modern upgrades, including an electric choke, fires up without protest and fills the blister hangar with a glorious rumble reminiscent of a Spitfire’s Merlin, whilst the ever-efficient Porsche dutifully follows the big Jag outside to warm up in the crisp morning air. There were 10 pubs to get to spread across the Cotswolds so we are hasty to get going, though only after the requisite amount of faffing of course. First stop is The Swan Hotel in Bibury, the nearest venue to the Hub and a very comfortable place to stay should you live too far away to get to our Sunday morning Coffee and Classics in comfortable time. The cars are given enough time to warm up as we roll down the hill into Bibury to get some picturesque shots. I opted for the Porsche first or rather Charlie opted for the XK120. Immediately the 911 feels at ease with the narrow lanes, the cabin is spacious and the sightlines down the famous curved bonnet and over the headlights offer great visibility, the hips of the car are actually very narrow and easy to judge through the single driver’s side wing-mirror as we tiptoe past cars coming the opposite way. After visiting the Swan the road opens up. The A435 is a great stretch of road to properly exercise the cars for the first time. The Jaguar in particular relishes the chance to stretch its legs and blow out the cobwebs. It seems to have as much straight-line speed as the Porsche, even edging ahead on the short straights but through the corner the Porsche just handles the bends in its stride, dispatching the bumpy road as a minor inconvenience while the Jag looks a little more excited mid-corner. The Village Pub (the VP) in Barnsley is the next stop and once again the cars pulled up outside the elderly Cotswold building look particularly fitting. Sadly, it wasn’t quite lunch time and so after dropping off some Motor Marts we trundled on down to Barnsley House for a coffee. Here the cars were totally swamped as a tour group about to board their bus swooned over the XK120’s elegant yet imposing curves and posed for endless selfies in front of the gorgeous blue of the Porsche, the more discerning of the group admiring the cookie-cutter alloys. 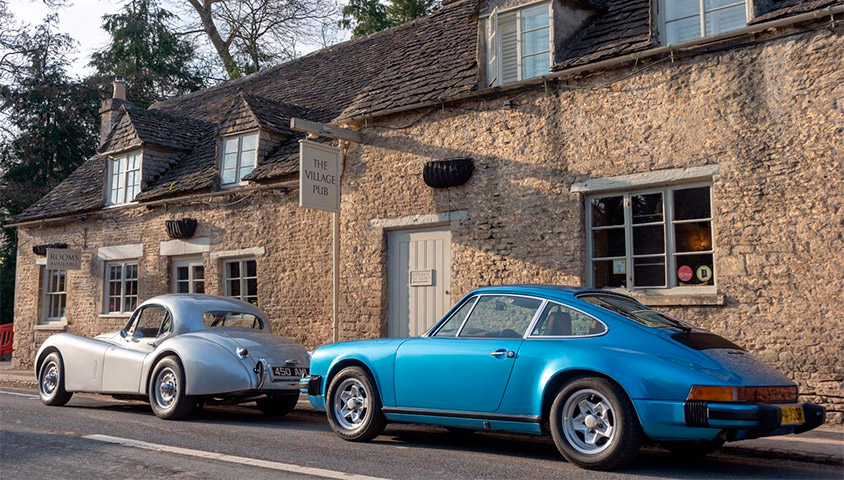 As we enjoyed our coffee in front of the fire at Barnsley House discussing the cars with the remaining patrons, the tour bus left and we set off soon after, only to come up behind it. With a clear stretch of road ahead it was time to see what the 3.0 can do when not being held up by a Jaguar. The 3.0 boxer engine was developed by Porsche to fit with a turbo charger in order to meet homologation requirements for their Le Mans cars but was also offered in naturally aspirated form. Up to now this engine had felt a little insignificant, however with a quick downshift from 4th to 3rd and a slightly heavier right foot this 6-cylinder engine can really sing and before I knew it the tour bus is a long way behind. I almost feel guilty for writing off this engine before giving it the beans, the smile on my face as the next corner rushes up ahead tells me all I need to know about this car. It is a phenomenally capable machine, quick even by today’s standards. The fact that it isn’t theatrical when manoeuvring at low speeds is wholly forgiven and when you think about it, who wants theatrics when trying to reverse into a parking space? 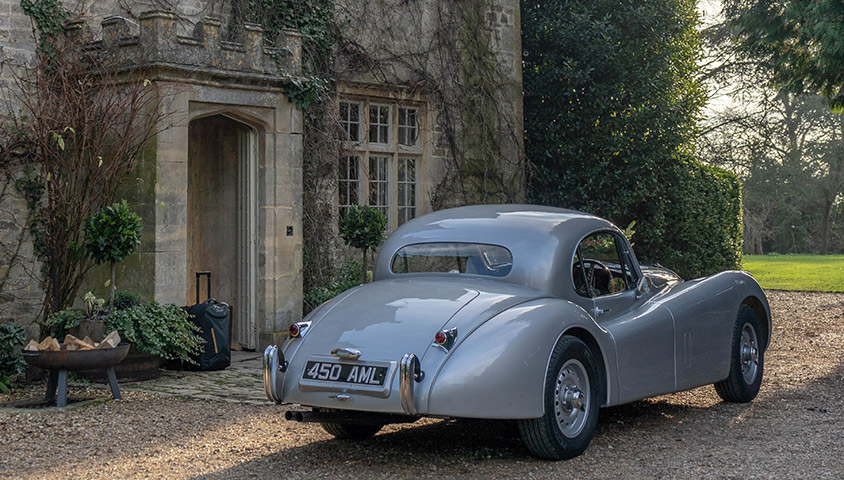 The uprated XK120 slides past the bus close behind, the uprated exhaust system sounding great even from the cabin of the Porsche; Charlie’s face hides nothing, his smile clearly visible in the rear mirror. By now I’m really looking forward to getting into that Jag later on.

Next stop on our Motor Mart map is the Wild Duck on the other side of Cirencester. Having never been there before I was looking forward to a good lunch. The Wild Duck is a fabulous little pub tucked away in Ewen and the crackling fire and dim light offers welcome respite from the bitter cold after staging some photos outside. Over a hearty parsnip soup I persuaded Charlie to swap for the Porsche and so we set off in search of the Green Dragon. The XK120 is a very different proposition to the Porsche – that much is clear just from the contortions required to fit all 6’3” of me into the cabin but once settled inside it is a very comfortable place to be with plenty of room. The car bursts to life with a short press of the starter button and I easily find first gear in the tight gearbox. At low speeds the EZ power steering system is a real blessing and is a welcome addition to the car whilst becoming pleasantly unobtrusive as the speed increases. As mentioned this car has had a series of modern upgrades – something that is becoming increasingly popular these days amongst restorers and factory manufacturers. This XK120 has also been blessed with disk brakes front and rear, uprated anti-roll bars and modern shock absorbers to improve damping. All this coupled to some subtle interior upgrades to improve the driving position makes for one very sorted Jaguar. 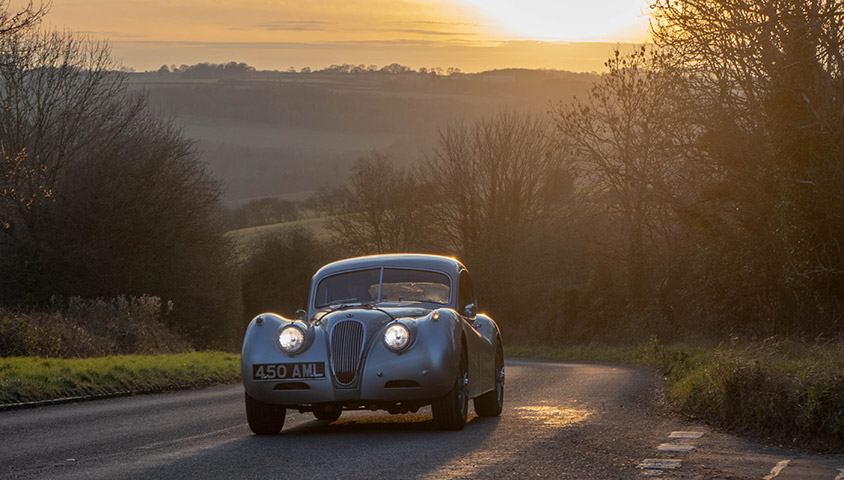 The long nose of the Jaguar is a pleasure to guide along some twisty B-roads back in to Cirencester, Charlie leading the way in the 3.0. The Jag, although uprated is still a nearly 65-year-old car and so behaves very differently. First off, the engine is magnificent, pulling smoothly all the way through the rev range with endless torque in 3rd and 4th at low speeds. It’s not until we get to the A417 that Charlie radios to tell me that the final mod to this car is a 5th gear, not marked on the top of the gearstick. This really transforms the car at motorway speeds, making the journey far more relaxed as the Jag settles down for a quick sprint up the motorway. In the bright sunshine the Porsche’s curves look magnificent up ahead and turns the heads of passing cars, clearly happy to see two gorgeous machines out being enjoyed even in mid-winter. Charlie soon turns off to find some more exciting roads on the way to The Green Dragon. Here the fixed-head is in a class of its own. The gearbox is so crisp and short and is a delight to match the revs on the downshifts, each time allowing you to savour that straight-six as the engine barks eagerly. Around the bends the car is undoubtedly less compliant than the Porsche but this encourages you to take charge of car and become more involved, adjusting the steering and throttle inputs to keep the car settled mid-corner, rather than just letting the suspension set-up take care of everything. After saying hello in the Green Dragon and depositing some Motor Marts we head to Daylesford – the farm shop that makes you feel like you’re in South Kensington and not deepest-darkest Cotswolds; it has recently become somewhat of a meeting place for car enthusiasts. By now the light was fading and time to get to the Kings Head Inn at Bledington was running out. The Jag’s headlights are surprisingly good in the gloom as we pushed on, never tiring of that fantastic straight-six rumble. As we settled down into the comely atmosphere of the Kings Head we reflected on our day and the cars we had the fortune to enjoy. One of the main reasons we hear from people for not driving their cars is that they don’t have an occasion to use them. However, these cars deserve to be driven and taken on journeys such as these – they brighten your day by driving them and are admired everywhere you visit. With a little bit of planning and a rough purpose to the day (such as visiting 10 pubs in one afternoon) these cars can be properly enjoyed and driven as they were intended. Which one would I take home? I’m afraid that’s simply too difficult to decide.

Looking for the perfect car to take to the pub, or perhaps on a more meaningful journey? Check out the XK120 and Porsche Carrera 3.0 in our online showroom or pay us a visit to see them in the comfort of our showrooms.