Memories of THE 2010 Concorso d’Eleganza AT Villa d’Este Ten years ago this week I was listening to the radio and was amazed at what I was hearing; Heathrow airport and most other airports in the United Kingdom were closed due to a volcano erupting in Iceland. This was hugely inconvenient for many people around the world who needed to travel by air as the planes were unable to fly due to the dust cloud produced by the volcano. This affected us too as we were supposed to be flying to Italy in three day’s time for the 2010 Concorso d’Eleganza Villa d’Este. I didn’t want to miss this wonderful event…

…so quickly made the decision to drive to Cernobbio, the small town on the spectacular shores of Lago di Como where the Concorso d’Eleganza Villa d’Este is held; possibly the most glamorous motoring event in the world.  I had driven to Milan the previous month in my Alfa Romeo GT 3.2 to attend an event at the Alfa Romeo Museum and participate in a track day at Monza, and I was off to the Nürburgring with it for another track session the following weekend.  Therefore I did not wish to take the GT so it was left to my daily-driver Land Rover Defender to transport us there. Snigger as you will (and Laura was not impressed by my choice), but with numerous JE Engineering modifications and nine laps of the Nürburgring under its road specification tyres, I knew this two-year old machine was more than capable.  On previous trips around England and Europe I had also found that its elevated seating position was jolly useful for peering over crash barriers and walls when touring beautiful countryside. We set off at sunrise on the Wednesday to give us a relaxed journey down without upsetting our original travel plans, which involved flying on Thursday.  After spending the night near Basel we reached our destination of Bellagio on Thursday afternoon, a beautiful old town on a tip of land that juts into Lake Como, a distance of just over eight hundred miles from Barnes in West London. …before arriving at the excellent Albergo Centrale located right in the centre of Cernobbio, our home for the next two nights.  Any negative feelings we still had towards the Icelandic dust cloud turned positive when the hotel upgraded us to a room overlooking the town square due to another guest’s non arrival.  After strolling up to the Villa d’Este hotel to check in at the press office and gather our passes and related paraphernalia for the following days big event, we retired for an early night and some much-needed rest, hoping that the rain drenching the town would have passed by the morning. 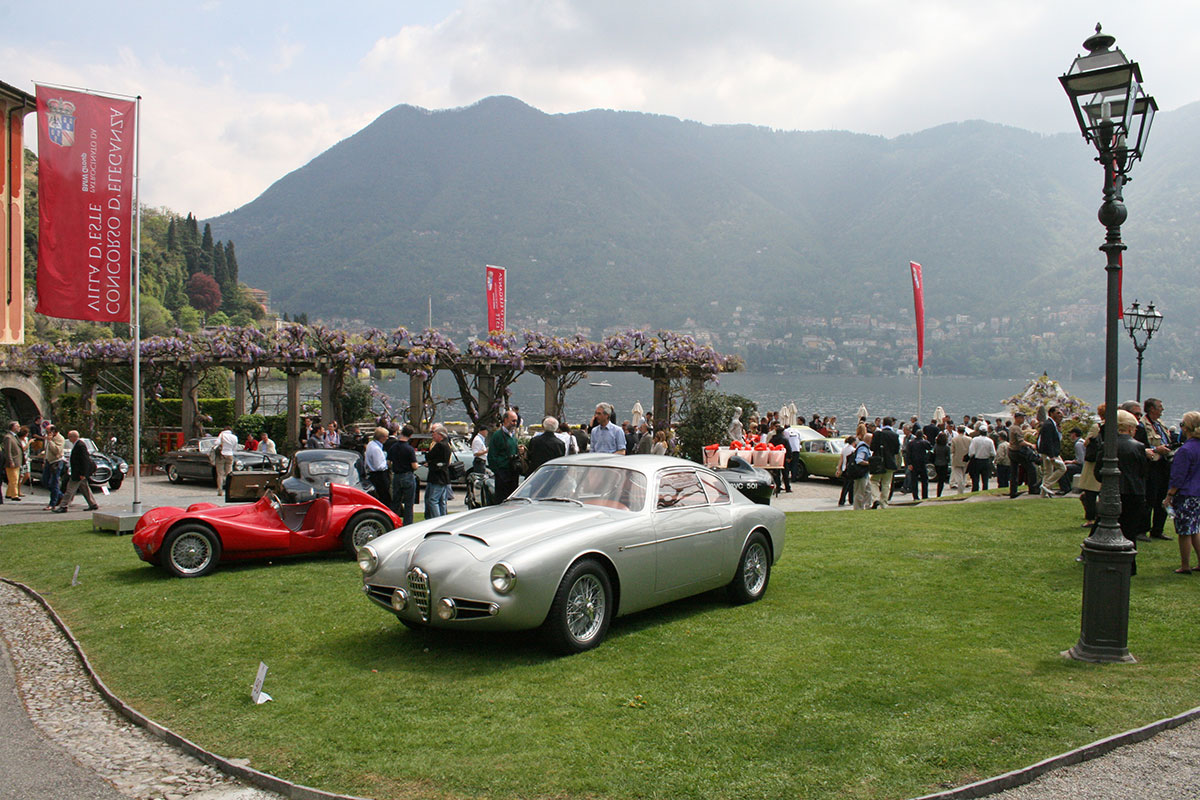 Friday is set-up day at Villa d’Este with cars and their owners arriving and settling into their spectacularly beautiful surroundings. On previous years I have spent most of the Friday standing with friends on the terrace of the Albergo Centrale watching the exhibiting cars drive past as they arrive, taking full advantage of the traffic lights directly in front of the hotel to soak up the view, photograph the cars, and absorb the magnificent noises and smells as they roar away upon the lights turning green.  Saturday is the main event within the buildings and grounds of the Villa d’Este hotel and is open only for display car owners, a small number of their guests, and the press.  On the Sunday the show moves to the other side of town to Villa Erba for the public day, where ticket holders can view the cars that were on display at Villa d’Este as well as many additional vehicles and themed displays.  The cars travelling between the two venues creates quite a spectacle as (whether road legal or not), they all drive for just under a kilometre through the centre of Cernobbio to Villa Erba.  This beautiful lake-side property was the former home of the Erba and Visconti families but is now a spectacular exhibition venue.  England has the NEC in Birmingham, Italy has Villa Erba on the shore of Lake Como! …and after a hearty breakfast we set off for the short walk to the Villa d’Este hotel for the Concorso.  As we entered the hotel grounds it felt like entering a bubble of wonderfulness, with beautiful people and cars in an idyllic setting.  The hotel grounds were bustling with activity with some people rushing around with strained expressions as they organised some last-minute matters, while others were relaxing in comfortable chairs beside the lake sipping cappuccinos and observing the mystical world in front of them. The activity was not confined to the land, as the lake and the air above it were equally busy with sea-planes flying above the water, and boats such as Rivas and Chris Crafts that rival the cars for their beauty, sweeping up to the shoreline and docking at the hotel’s private jetties.  I was especially taken by the flock of brightly-coloured Amphicars chugging around the lake shore and up the hotel’s slipway, forming a side-show all of their own. The cars entered into the concours were displayed around the pathways and grassed areas of the hotel grounds in a lovely relaxed manner and were as special as on my previous visits to the Concours, with the finest examples from a roll-call of the greatest marques from the past and present.  Familiar marques were present such as Alfa Romeo, Aston Martin, Bentley, Ferrari and Maserati, but there were unusual and arguably more special ones too such as Bugatti, Cisitalia, Delahaye, Duesenberg, Squire, and Talbot Lago. The history of the cars is as important as their condition…

…with wonderfully patinated cars alongside freshly restored ones, all with a chance of winning the many prizes from the judging panel and public votes.  The winners are revealed at a prize giving on Sunday evening at Villa d’Este amid a spectacular fireworks display over the lake, the reflections on the water seemingly doubling the size of each firework sparkle. …and we set off early to Villa Erba hoping to be one of the first through the gates to avoid the many fellow enthusiasts who would be attending the busy public day.  I was also keen to be able to take photographs of the lovely cars in their beautiful setting without lots of people in the way. With our original plan to have flown back on Sunday evening, we decided to limit our time at Villa Erba and commence our journey towards London later that morning.  Departing Cernobbio at 11:00am we made good progress through Italy and France but dusk started to settle in sometime before we had reached our intended stop-over near Beaune.  Faced with finding an unfamiliar hotel in what would shortly be nigh time (remember that doing such things on mobile telephones ten years ago was not as easy as it is now) we decided to press on and get back to London.  The remainder of the trip home went without delay due to the lack of nigh time traffic, and we arrived back in Barnes at just gone 3:00 in the morning, seventeen hours and 845 miles after leaving Lake Como.  Five days later I was travelling back through the Channel Tunnel again heading towards the Nürburgring, this time in something a little faster. The Concorso d’Eleganza Villa d’Este is an event as wonderful as its name, especially when spoken by an Italian

Having been to the private event at the Villa d’Este hotel a few times I debate whether it is any better than the public event at Villa Erba as there are many benefits to attending the day at Villa Erba, especially if you arrive early.  The venue is not as cramped as Villa d’Este and it also benefits from a beautiful lake-side setting and wonderful old buildings and gardens.  Due to the extra space at Villa Erba the cars are positioned further apart and there are more of them too, plus motorcycles, as many manufacturers and clubs put on superb themed displays of vehicles.

I can thoroughly recommend a visit to this event, but certainly do not feel you are missing out by not attending the main event at Villa d’Este. Instead, while the cars are on display at Villa d’Este you could hire a beautiful old boat and helmsman and observe the event from the water in front of the hotel, and then continue to visit many of the picturesque small towns on the Lake Como shoreline such as Bellagio and Como, and many others. LOOKING FOR A CLASSIC TO GRACE A CONCOURS OR TO CREATE YOUR OWN FABULOUS MEMORIES WITH? LOOK NO FURTHER THAN THE HUB HANGAR SHOWROOM

Want to get in touch with James? Click here to email him