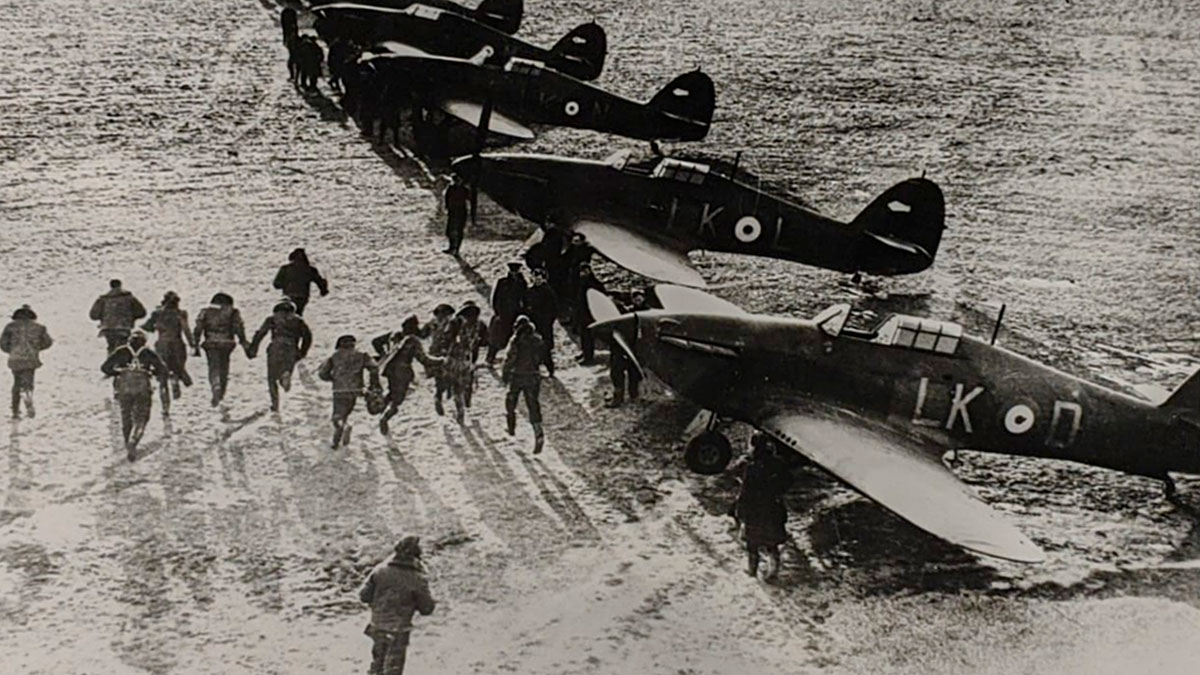 On Sunday 3rd May The Classic Motor Hub was due to celebrate the impending 75th anniversary of VE Day. Sadly Covid-19 has ruined our best laid plans of military vehicles, bunting and Glenn Miller to remember the enormous sacrifice, courage and determination shown by people in all walks of life throughout the war. However, the 75th Anniversary of Victory in Europe Day gives us the perfect opportunity to tell the Story of RAF Bibury and The Few who served there to protect Britain during its darkest hour.

If you have not yet visited The Classic Motor Hub you may not appreciate that our award-winning showroom is located in a Blister Hangar first erected during WWII to house Hurricanes and later Spitfires. 87th and 92nd Squadron (Hurricanes and Spitfires respectively) were both stationed at RAF Bibury for periods of the war and played a crucial role in defending central southern England as Göring’s Luftwaffe failed to crush the RAF at the Battle of Britain.

RAF Bibury opened in the spring of 1940 as a Relief Landing Ground for No. 3 Service Flying Training School based at South Cerney which flew both Airspeed Oxfords and Hawker Harts though it was the twin-engined Oxfords which saw the most action at RAF Bibury. Fighter involvement at RAF Bibury began in August 1940 as the Battle of Britain reached its peak. The Hurricanes of 87 Squadron roared over the grass airstrip first, followed shortly after by the Supermarine Spitfires of 92 Squadron, both sent by Fighter Command to fill a defensive geographical gap in central England, ready to scramble to defend the manufacturing hubs around Bristol and Birmingham. The Hurricane squadron (and likely the Spits too) rotated through the airfield in two flights, each doing a week on duty leaving the relief crew to explore the Cotswolds over the gorgeous summer of 1940. We cannot be sure every pilot had a British sports car, but it is best to imagine them zipping along country lanes to the local Public Houses and their accommodation down the road in Northleach in MG Midgets and Austin 7s. The lack of accommodation at the airfield meant that the ground crew had to camp out in tents and the pilots at nearby Northleach: the officers at Walton House, the sergeant pilots at The Red Lion.  Northleach had many troops during the war, the most famous being the Kings Liverpool Rifles comprising most of the Liverpool football team including the then well-known names of Jake Balmer and Harry Easton. Their garrison headquarters was at West End House; several officers were also billeted at Farmer Leach’s Coalyard Farmhouse and the Cotswold Hall was the local mess. Pilots of the 87 Squadron in Northleach outside Walton House However, the arrival of frontline fighters meant the once sleepy trainer-relief airfield was now a target for the Luftwaffe. The upgraded Sommerfeld Track metal runway and hangars came under attack from a Junkers Ju. 88 which bombed and strafed the airfield with its machine guns killing one airman (who’s name remains unknown). One Spitfire was destroyed and four more were damaged by shrapnel and stray bullets, the aftermath of the attack was visible for many years after with nearby buildings displaying bullet holes in the roof and Cotswold stone. Junkers Ju 88 of the type that attacked RAF Bibury

With their noses somewhat out of joint by this intrusion two spitfires of 92 Squadron got off the ground in pursuit of the raider. One of the aircraft was flown by T.W. Wade who caught up with the Ju 88 over the Solent. Fortunately for Wade, 92 Squadron were one of the first squadrons to receive “B Wing” Spitfires equipped with two 20mm side-mounted Hispano cannons and four .303 Browning machine guns which were all used to full effect in dispatching the heavily armoured bomber. During the battle Wade sustained damage from the Bomber’s defensive machine guns and had to make a forced landing and hasty escape from his burning aircraft. An Airman on the ground at RAF Bibury with his Hurricane. In the background, one of the Blister Hangars like that which would become the Hub Hangar Showroom Left, a delayed-action explosion on the ground at RAF Bibury as one airman takes shelter under a truck. Right, life goes on very quickly!

On the 17th October the same year, one of the few known casualties lost their lives at RAF Bibury in an accident after losing control during a night-time overshoot of the landing ground. Sergeant S. F. Smith’s aircraft was destroyed by fire shortly after crashing. He was the thirtieth young airman to die that year based at one of the South Cerney relief landing grounds. Pilot Officer Alexander Hendry Thom of 87 Squadron, responsible for destroying two enemy aircraft after pursuing them out to sea Acting Squadron Leader Denis Graham Smallwood of the 87 Squadron, who was temporarily stationed at RAF Bibury

By the end of 1941 the fighters had departed, and the Oxfords of 3 FTS had returned for their circuits and bumps. The airfield continued to play an important part in the war, becoming a key training base specialising in night landings. A recent visitor who flew into RAF Bibury during the War recounted how terrifying it was to land atop the hill at night, with minimal landing lights visible during the blackout and exhaust flames from their own engines blinding pilots as they lined up on final approach. An airman on the ground with his Hurricane at RAF Bibury

By 1942 the airfield was used as a base by No.1539 Beam Approach Training Flight which used radio technology pioneered by the RAF to guide aircraft in to land during poor weather but problems with the signalling beacon, (caused by a newly erected hangar reflecting the beacon signal) meant much of the BAT Flight had to operate from South Cerney. The airfield was also prone to bad weather water-logging the runway and halting operations. A map showing the extent of the site at RAF Bibury. Hangar 47 is our own blister which is still standing, whilst Hangar 100 and 48 has been rebuilt and repurposed on the farm next door

By 1944 bad weather had deteriorated the runway so much that it was rarely used, and the site was taken over by 7 MU for storage purposes before eventually being closed in 1945. For decades to come the old control towers, munitions buildings and Blister Hangars housed Spitfire fuel tanks, billets of aluminium from melted down surplus aircraft and radio valves which were systematically being stolen. The crests of the 87 and 92 Squadrons currently on display in The Hub Hangar Showroom Library.

After a long period as a farm machinery repair centre, Bibury Airfield was purchased by Martin Chisholm who was inspired by the history of the site and who’s vision has resulted in the award-winning Classic Motor Hub.

While we of course wish we could celebrate VE Day and the history of the airfield at The Hub, please don’t let these unusual times stop you from celebrating Victory in Europe day in your own way, remembering the selflessness of all those who fought and died for our freedom 75 years ago. The Airfield Conservation Trust memorial erected in October 2018 at the main gates here at The Classic Motor Hub.