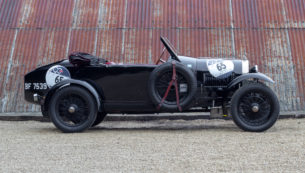 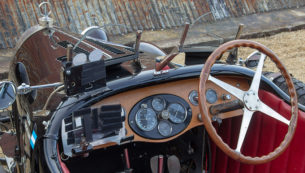 Ettore Bugatti built his reputation on his earliest designs. The cars manufactured in Brescia between 1909 and 1926 are considered some of the purest of Bugatti’s thanks to their elegant short-chassis designs featuring exquisite exposed mechanical components as well as reliable smaller capacity high performance engines.

In the late 1920s to meet demand for touring and luxury cars Bugatti started to produce larger 8-cylinder vehicles. As impressive as these cars were, many of Bugatti’s customers still preferred the smaller 1327cc and 1496cc 4-cylinder cars which offered buyers less complexity than these 8-cylinder leviathans.  Furthermore, the 4-cylinder cars, offered reasonable performance with a fraction of the up-keep.

With this in mind Bugatti developed the Type 40. The four-cylinder 1496cc engine in the Type 40 was heavily derived from the 3-valve per cylinder engine from the race-bred Type 37 and was mounted to a short chassis and coupled to a Type 38 gearbox and rear axle albeit with a lower ratio and slightly narrower track. The Type 40 also received the most up to date brakes and 787 cars were built, the production running from 1926 to 1929. The most sporting of which was the Grand Sport body which echoed the lines of the Grand Prix cars in a more commodious 4-seat cabin.

The car first appeared in June 1926 and was an instant success, proving to be extremely reliable, the model soon became a favourite for adventurers and explorers of the age choosing the car for its good road manners, sprightly performance, direct steering and comfortable ride. Notably the Type 40 was the vehicle of choice for Lieutenant Frédéric Loiseau’s epic 11,500 km journey across the Sahara and back in 1929.

The car offered for sale by the Classic Motor Hub was delivered new in 1927 via the London Bugatti agent Colonel Sorel for onward delivery to Australia where it was purchased through the Taylor Bros. Bugatti Agency in Sydney by the 35 year old Professor of anatomy Arthur Neville Burkitt for £525.  Professor Burkitt was said to have owned 5 Bugattis at the time including the Type 37A that Bill Thompson drove to win the 1930 Australian Grand Prix at Phillip Island with Burkitt as riding mechanic. He was a generous man who readily lent his cars to others and it is believed to have been used by a number of other drivers in reliablility trials and speed tests and even a tour of New Zealand by Russell Taylor the original importer in 1928!

During Burkitt’s ownership the chassis plate of 40265 was attached to the firewall, likely one of his other cars and changed for customs reasons as the car travelled between events. This is no longer attached and the correct number now appears on a replica Bugatti Owners Club plate fitted

The next owner C.S. ‘Jim’ Perry had seen the car in the Taylor Bros Bugatti dealership in Sydney some 12 years earlier. Missing the opportunity to buy it new he had kept track of it, finally acquiring the car in 1939. His ownership would last more than 40 years! By the 1950’s after many years of family motoring Jim Perry decided to turn it into a hillclimb special and removed the by now well-worn Australian built touring body to replace it with a home built modern fibreglass sports body based loosely on the post war Bugatti 101 prototype. Perry, a keen mechanic also fitted a detachable cylinder head and lowered the seating position but was sure to keep all original parts in storage.

The next owner was renowned motoring journalist Pedr Davis who bought the car and a mound of spares including the original radiator in 1982 from Perry when his health deteriorated. Davis embarked upon a 4-year restoration of the Type 40 back to its original specification, fitting a replica Grand Sport body by the respected coachbuilders Wilkinsons of Derby. By 1986 Davis’ Bugatti was back to factory condition and enjoyed the car on several endurance rallies including the 1988 Bicentennial International Veteran and Vintage Car Rally where he writes in his memoirs that he ‘battled rain, dust storms and strong winds – but happily the Type 40 completed the 1500 kilometers with only minor mechanical ailments, all fixed within minutes’.

After 18 years of ownership the car then passed via auction to the serial Bugatti collector Guy Dubrulle in France and over the following decade through a couple more owners before being purchased by the highly respected French vintage car dealer Bruno Vendiesse. In 2014 Martin Chisholm acquired the car for the current owner and in 2015 following a DVLA clampdown on imported vintage cars the Type 40 was subjected to a full inspection by Mark Morris of the Bugatti Owners Club. He confirmed that almost all of the numbered mechanical components were matching and the report is included in the history file with photographs and a list of the matching numbered components.

It is worth noting that the Type 40 has one of the highest Mille Miglia co-efficiencies of 1.75 making it a welcome entry on the world’s most exclusive competitive road rally. The car is supplied with removable full width windscreen and aero screens, hood, tonneau and side screens. It is attractively finished in black with red leather upholstery and UK registration with a FIVA passport.

This Bugatti Type 40 is now available for sale and immediate inspection at The Classic Motor Hub.