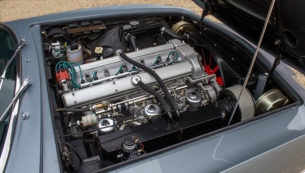 The William Towns designed DBS was designated as the replacement for the DB6. Powered by the same 6 cylinder engine producing 282 BHP the car provided the drivers and passengers with greater interior space and comfort together with improved handling over the DB6. Four quartz iodine headlights gave the car a distinctive look and with a width of 183 cm it was a substantial car for its day. Only 803 examples were ever produced and many of those are no longer with us.

The DBS was also fast for a 1960’s full four seater (141mph, 0-60mph in 7.1 seconds). Thankfully the factory retained the superb chrome bezel led instrumentation from the DB6 and chrome wire wheels lost in later models of the V8 which gives the car a very period look.

In the 1969 the Bond film ‘On Her Majesty’s Secret Service’ ensured the DBS reached a more public audience, however, the DBS really came into the spotlight with Roger Moore and Tony Curtis in hit show ‘The Persuaders’ where a 6 cylinder car was used despite it being dressed as the slightly later V8 variant.

This 1970 example finished in its original colour scheme of Azzuro Blue Metallic with Dark Blue hide has had the benefit of a recent bare metal re-paint, full engine rebuild and new 5 speed Tremec gearbox. The engine bay of this DBS is a pleasure to view.

Other updates included 4 new wheels and tyres, fresh brakes and suspension. A hidden modern audio system. The underside of this vehicle is open to any inspection. Supplied ready to go on any long distance tour the 6 cylinder examples of this model are extremely rare in this mechanical condition.

Available for sale and immediate inspection at The Classic Motor Hub.